O God, I beseech you, let us follow your example. The more we suffer and the more we are tempted, the more we should pray. In prayer is our only help, our only strength, our only consolation. […] The deeper into agony we fall, the more necessary it is for us to throw ourselves into the embrace of our beloved, pressing ourselves against him in uninterrupted prayer.  -Bl. Charles de Foucauld

In the parable of the prodigal son, Christ shows us mercy as a love that is “able to reach down to every prodigal son, to every human misery, and above all to every form of moral misery, to sin. When this happens, the person who is the object of mercy does not feel humiliated, but rather found again and ‘restored to value’.” Thus, “mercy is manifested in its true and proper aspect when it restores to value, promotes and draws good from all the forms of evil existing in the world and in man.”  -St. John Paul II, Dives in Misericordia

Therefore, since Christ suffered in the flesh, arm yourselves also with the same attitude (for whoever suffers in the flesh has broken with sin), so as not to spend what remains of one’s life in the flesh on human desires, but on the will of God. For the time that has passed is sufficient for doing what the Gentiles like to do: living in debauchery, evil desires, drunkenness, orgies, carousing, and wanton idolatry. They are surprised that you do not plunge into the same swamp of profligacy, and they vilify you; but they will give an account to him who stands ready to judge the living and the dead.  – St. Peter (1 Peter 4:1-5)

At the evening of life, we shall be judged on our love.  – St. John of the Cross

To make Lent complete, one must focus on three pillars:  fasting, almsgiving, and prayer.  Much of this blog has been dedicated to the practice and culture that surrounds the first pillar, (I’ll touch on the second pillar, almsgiving, in a future post), but for most, the pillar of prayer is often the most neglected during Lent.

So far in this blog, I have provided information on the 54 day rosary novena and the Stations of the Cross, both excellent spiritual tools.  This week, I’d like to introduce one more:  Eucharistic Adoration. 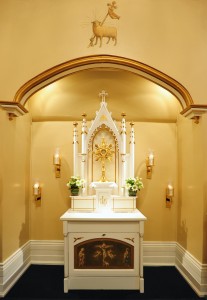 Picture at the Divine Mercy Chapel at St. Martin of Tours, Louisville (Photo courtesy of http://www.stmartinoftourschurch.org)

The tradition of Eucharistic Adoration stems from the faithful traveling from church to church just to witness the consecration at different parishes.  As such, many Catholic parishes set up special chapels where the faithful can pray to the exposed Blessed Sacrament, placed in receptacle called a monstrance, any time of the day.  The practice of exposing the Blessed Sacrament 24 hours a day is called “perpetual adoration.”  Most parishes will often set up specific times for the Eucharist to be exposed, perhaps for a few hours on a specific day of the week.

Regular devotees of the practice will often spend at least one hour per week, maybe even daily, praying quietly to the Blessed Sacrament.  The idea of one hour comes from the Biblical passage when Jesus asked His disciples while praying at Gethsemane after the Last Supper before His passion:

“And He came to the disciples and found them sleeping, and said to Peter, “So, you men could not keep watch with Me for one hour?”  (Matthew 26:40)

As a part of the Year of Mercy, Pope Francis is encouraging parishes around the world to celebrate “24 Hours For The Lord,” where the Eucharist will be exposed for 24 hours from March 4-5 and the sacrament of Confession would be available.  The Archdiocese of Louisville has 33 parishes hosting 24 Hours for the Lord.  Check the list here and contact a parish if you’re interested in taking an hour or more.

Even though Lent is well upon us, I encourage you to look into incorporating a Holy Hour into your weekly schedule.  It has many surprising benefits!  In Louisville, St. Martin of Tours in the Phoenix Hill neighborhood and St. Paul in southwest Louisville (Pleasure Ridge Park) are the only perpetual adoration chapels, but there are many other parishes that offer Eucharistic Adoration at other times of the week.  You can check out the schedule at either the Archdiocesan website or at the website of local Catholic radio station WLCR.  The Archdiocese of Indianapolis lists their perpetual adoration chapels here.  The closest of these chapels to Louisville is in either Bedford, 40 minutes south of Bloomington, or in North Vernon, 25 minutes east of Seymour.

The sign of the cross makes kings of all those reborn in Christ and the anointing of the Holy Spirit consecrates them as priests, so that, apart from the particular service of our ministry, all spiritual and rational Christians are recognized as members of this royal race and sharers in Christ’s priestly office. What, indeed, is as royal for a soul as to govern the body in obedience to God? And what is as priestly as to dedicate a pure conscience to the Lord and to offer the spotless offering of devotion on the altar of the heart?  -St. Leo the Great

Be humble towards God and gentle with your neighbor. Judge and accuse no one but yourself, and ever excuse others. Speak of God always to praise and glorify Him, speak of your neighbor only with respect — do not speak of yourself at all, either well or ill.  — St. Margaret Mary Alacoque

I have been crucified with Christ and I no longer live, but Christ lives in me. The life I now live in the body, I live by faith in the Son of God, who loved me and gave himself for me.  -St. Paul (Gal 2:20)

Our next stop on the fish fry tour took us to Indiana, the first time the Crew headed across the Ohio River.  The council is located in downtown New Albany, within a few hundred feet of the Ohio River and nestled among the historic mansions that line Main Street.

Our crew had grown to over 20 members, which included some of the Dominican Friars at St. Louis Bertrand.  The group had to split into 2 tables because of the size of our group.  Here’s the table with the Friars in attendance: 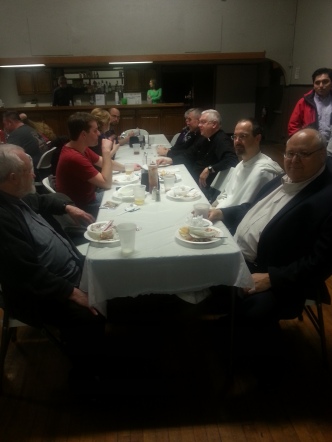 The menu was smaller than last week’s menu at St. Joseph’s, but still offered a variety of side items via the salad bar, something not seen at other fish fries.  The traditional cole slaw was available along with salad with the regular fixings.  Also available were oysters and shrimp. 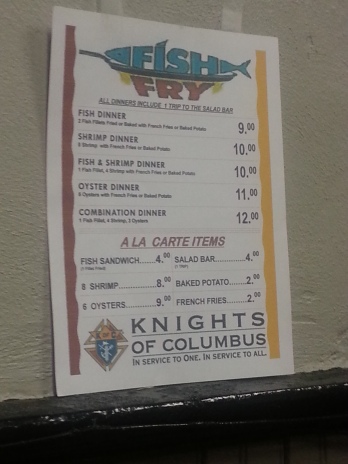 This fish fry was set up very similar to a made-to-order supper club.  After ordering at the cash station, you would take a number to then place at your table.  The cashier will send that number back to the kitchen via the electronic register, where they will bring out your entree.  You could head to the salad bar while waiting for your entree.  Wait time for our group was about 5-7 minutes.  Between the salad bar and perusing the table of crafts that the Lady Knights were selling, the wait was not an issue. 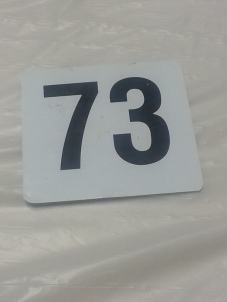 I kept my meal basic this week:  the fish dinner, which consisted of 2 fish fillets, with French fries, along with a bowl of cole slaw from the salad bar and a slice of carrot cake from the Lady Knights table (not shown in picture below, but very tasty).  As you can see, the fillets were well sized pieces of fish, enough for 2 sandwiches.  Along with the drink, this made for a very satisfying drink.

Of course, a fish fry is not complete without a separate fundraiser or cause.  At Cardinal Ritter, there were 2 of those:  the first cause, which received the tips from the bar, was the Cardinal Ritter Birthplace Foundation.  Cardinal John Ritter, the namesake of the Knights council, was born in New Albany and is currently the only native of Indiana to become a Catholic cardinal.  The Birthplace Foundation, founded in 2004, was founded as a community outreach center to continue the work of Cardinal Ritter.  The outreach center, which was the birthplace of Cardinal Ritter, is located an 11 minute walk from the council.  For more information, check out their website here.

The second charity was the Knights of Columbus Christian Refugee Relief Fund.  The council was selling solidarity crosses made of olive wood for $10 a piece.  These crosses would help Christians in the Middle East who are being persecuted for their faith, helping them with housing and medical care.  This initiative is being taken up by many councils throughout the country, and as the flyer suggests, is a symbol of solidarity, unity, and hope. 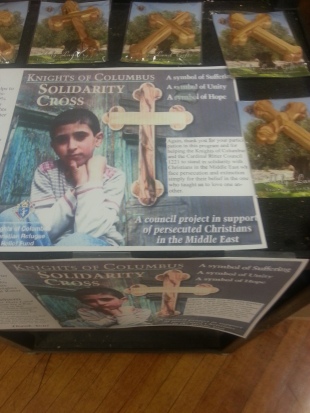 For more information and to donate to this program, you can check out the Knights of Columbus’ Christian Refugee Relief Fund page here.

Lo, you were within,
but I outside, seeking there for you,
and upon the lovely things you have made
I rushed headlong,
I, misshapen.
You were with me but I was not with you.
They held me back far from you,
those things which would have no being
were they not in you.

You called, shouted, broke through my deafness;
you flared, blazed, banished my blindness;
you lavished your fragrance,
I gasped, and now I pant for you;
I tasted you, and I hunger and thirst;
you touched me, and I burned for your peace.  – St. Augustine